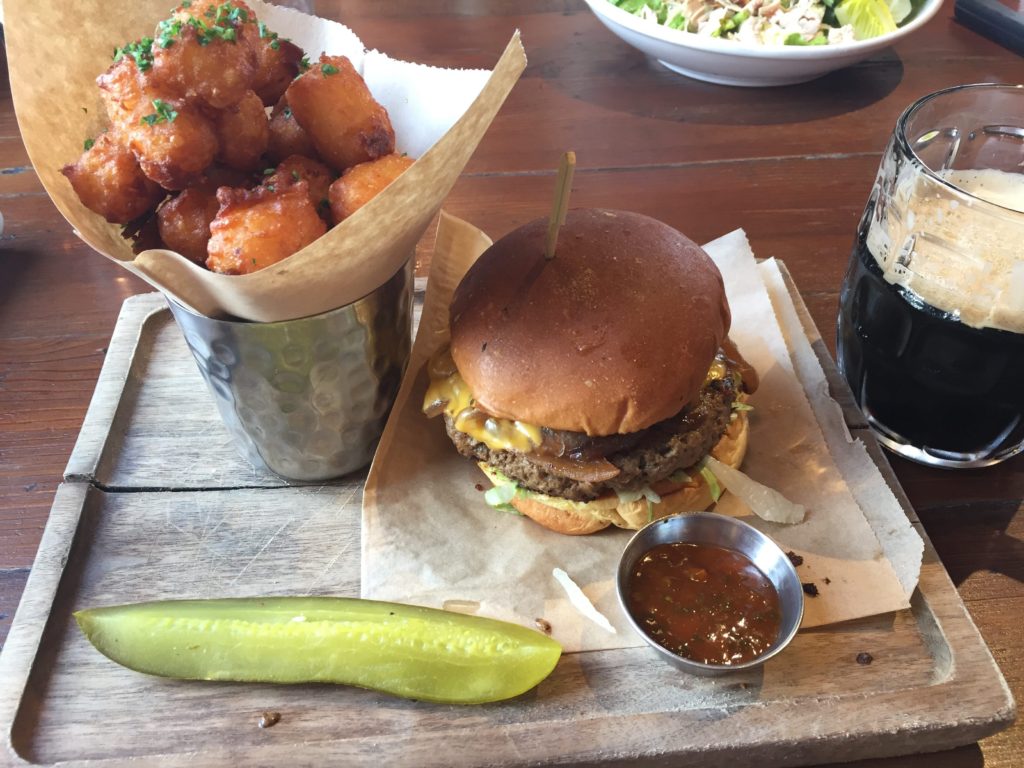 We were visiting Santa Barbara, CA, in August – it is like one of the most beautiful places in the world! The sunshine, the food is amazing, and the people watching – what can I say! I found myself in search of a great veggie burger and wondered if there was a difference in the Impossible Burger coast to coast.

I am mostly a vegetarian/pescatarian – once or twice a year I may have a piece of bacon (zoiks). One thing I miss is a really great burger. Even if you order a meatless burger made on site, it still doesn’t have that burger unctuousness. I had been reading a lot about The Impossible Burger and in the early days it was difficult to find on the East Coast.

I was in search of a West Coast pub that served The Impossible Burger. Jackpot! Around the corner of our hotel, The Hotel Milo was Finney’s Crafthouse & Kitchen. We are always on the lookout for a great pub and I was delighted to find they had The Impossible Burger on the menu. Theirs is served with grilled onions, American cheese, lettuce, tomato and house spread; I ordered it with a fine dark draft. The Impossible Burger did not disappoint. It was “meaty”, juicy, tasty and totally hamburger, you will be asking yourself: Where’s the Beef?

In February, we went to our local Tavern in the Square. I ordered what I thought was The Impossible Burger with bacon, onion jam, aged cheddar, and a fried egg, sounds great right. Not so much. It was dry, the bacon was hard not crisp (how do you do that?) had no flavor and they overcooked the egg! When I was getting ready to write this review, I revisited the menu at Tavern in the Square. The burger is not an Impossible Burger, but an Impossiburger. A little play on words?

Today I headed out for more research (Yum) and visited the Rail Trail Flatbread Co. to try their Impossible Burger. Which comes with chao cheddar (dairy free), green leaf lettuce, pickle, onion, tomato, vegan aioli, and potato bun. I substituted muenster cheese and added avocado. I ordered a Berkshire Beer Company Halidale Stout to go along. They were both  scrumptious – the beer and the burger.

The Impossible Burger is made by Impossible Foods . According to their website “We’ve been eating meat since we lived in caves. And today, some of our most magical moments together happen around meat: Weekend barbecues. Midnight fast-food runs. Taco Tuesdays. Hot dogs at the ballpark. Those moments are special, and we never want them to end. But using animals to make meat is a prehistoric and destructive technology. Animal agriculture occupies almost half the land on earth, consumes a quarter of our freshwater and destroys our ecosystems. So we’re doing something about it: We found a way to make meat using plants, so that we never have to use animals again. That way, we can eat all the meat we want, for as long as we want. And save the best planet in the known universe.”

It is a lofty promise, and the Impossible Burger totally lives up to expectations!

Eat, Drink and Be Merry,